Asphalt Built-Up Roofing: Tried and True for Durability and Economy 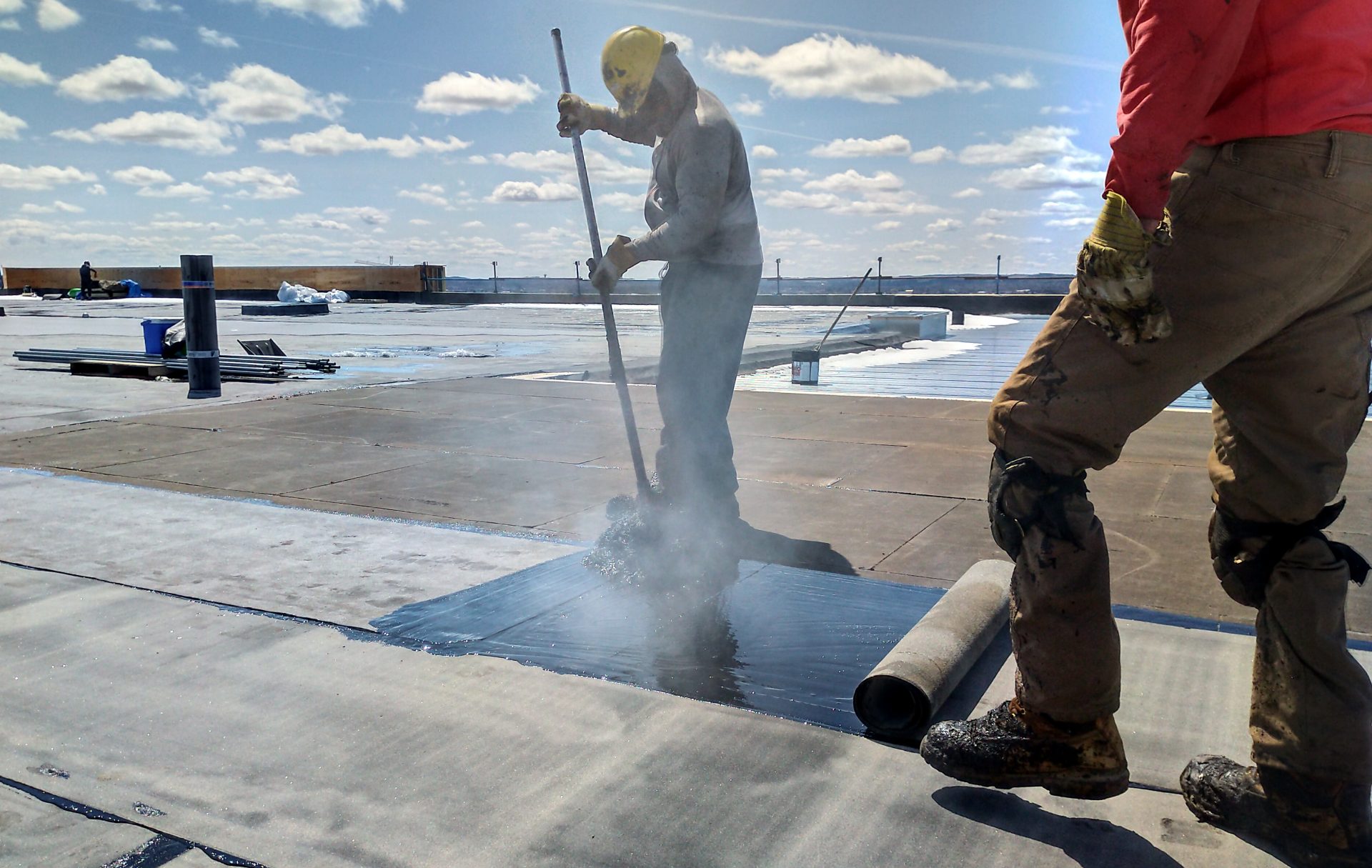 Who doesn’t want their roof to be durable, water-resistant, and economical? These desirable qualities have made asphalt built-up roofing (BUR) the most common roofing material found on low-slope or flat roofs in Canada. From modest beginnings in 1893, the marketed asphalt roofing industry has steadily grown to a $12 billion industry.

While new materials are becoming more popular, BUR continues to dominate the Canadian low-slope roof market and is a mainstay in the US—especially for commercial and industrial construction.

What is Built-Up Asphalt Roofing

As its name suggests, built-up asphalt roofing is composite of alternating layers of reinforcing fabric (plies) and asphalt, also known as bitumen. Next, the material receives a top layer of aggregate, such as stone or gravel, to protect the layers below from weather, UV, and falling debris. 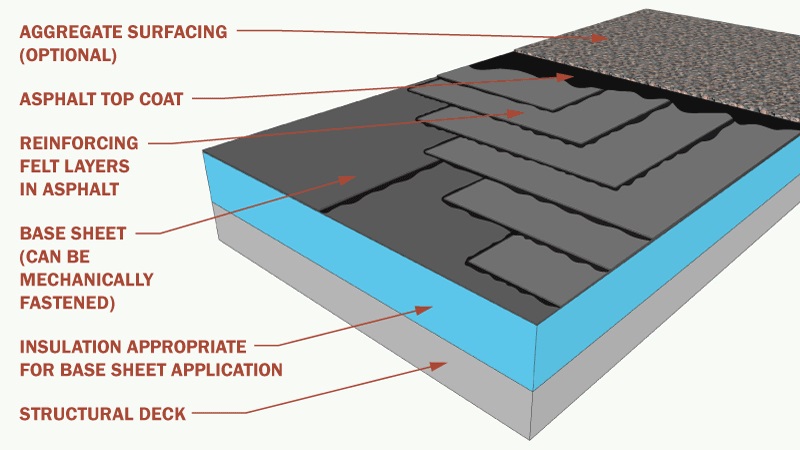 Some say that BUR literally changed the shape of buildings, especially in commercial construction. How? Unlike asphalt shingles, which are not sealed and require a fairly steep roof to shed water, BUR is a continuous sealed membrane that removes the need for such a roof slope.

Now that we know the basics about built-up roofing, let’s look at where it all started and its evolution throughout roofing development.

Before the early 19th century, most roofers used wood, clay, and slate shingles. However, beginning in the early 1800s in North America, roofers also used another method. They laid canvas fabric in place and coated it with pine tar or another sticky substance. The resulting duck cloth, otherwise known as canvas, was sprinkled with a protective layer of sand. 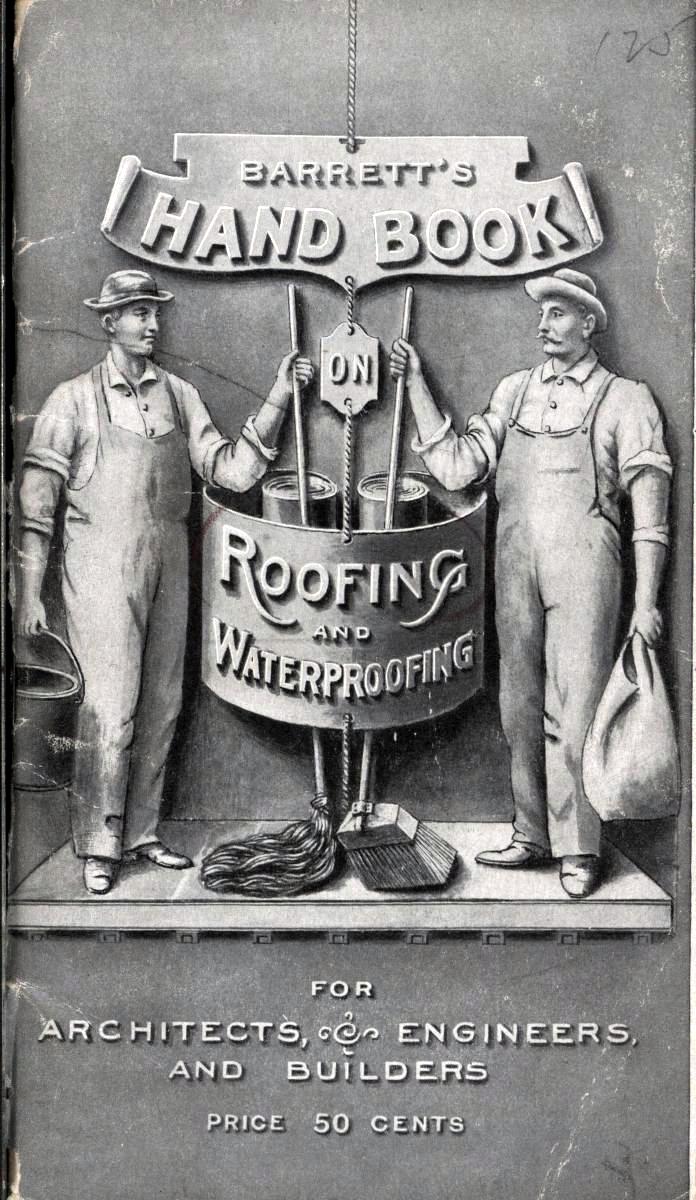 By 1840, we see the rise of composition or composite roofing. This method used pine tar and coal tar to saturate and adhere multiple layers of felt, topping it with sand or gravel. The first recorded use of melted asphalt for impregnating duck cloth was in 1844. This waterproof material, which was reliable and affordable, is the forerunner of today’s asphalt BUR. By the mid to later 1800s, this material attracted major distributors and property developers.

The Explosion of Composite Roofing in the Mid to Late 1800s

Many inventors and investors saw the potential of composite roofing, and the number of related patent applications exploded in the 1860s and 1870s. The next major innovation took place in 1893: the marketing of ready-to-apply asphalt-prepared roofing. This material was similar to today’s asphalt roll roofing, with a top layer of slate granules introduced for durability in 1897.

The next innovation forever changed roofing. In 1910, H.M. Reynolds Company of Grand Rapids, Michigan, invented the asphalt roof shingle—which continues to be the top roofing material for houses. By 1911, there was widespread use of asphalt shingles, with approximately 11 million produced in 1939 alone.

Statistics of the Bureau of the Census indicate that asphalt-prepared roll roofing and shingles constituted slightly less than half of all the roofing materials sold during 1937. This trend continued to grow throughout the middle of the 20th century.

BUR became the roofing of choice in Canada, dominating the industry until the 1970s. Unfortunately, a perfect storm of construction issues created problems for the industry. Many roofers had difficulty keeping up with the rapid evolution of roofing design, structural changes, new roof deck systems, new insulations, and other innovations.

Quality issues resulting from these new technologies and materials led to a dramatic decline in BUR to as low as 40 percent in the 1970s. As roofing companies adapted to industry changes, BUR regained its reputation as a solid and economical building process. At the same time, today’s roofers and building owners have a broader selection of roofing membranes than ever before, with low-slope roofing benefitting from materials including TPO, PVC, and EPDM rubber roofing.

Despite its ups and downs, built-up roofing still proves its value, constituting the largest segment of roofing systems in North America. The iibec (The International Institute of Building Enclosure Consultants) values this market at over $700 million. In Canada, BUR still makes up the majority of the roofing market, while in the US it has dropped significantly.

Although the BUR system has become less dominant in terms of market share over time, it can still be a very good option for your commercial building. New built-up roof membranes using fiberglass, polyester, modified bitumens, elastomeric, or plastomeric flashings are now more durable, less sensitive to moisture, and more flexible at lower temperatures than was previously possible. 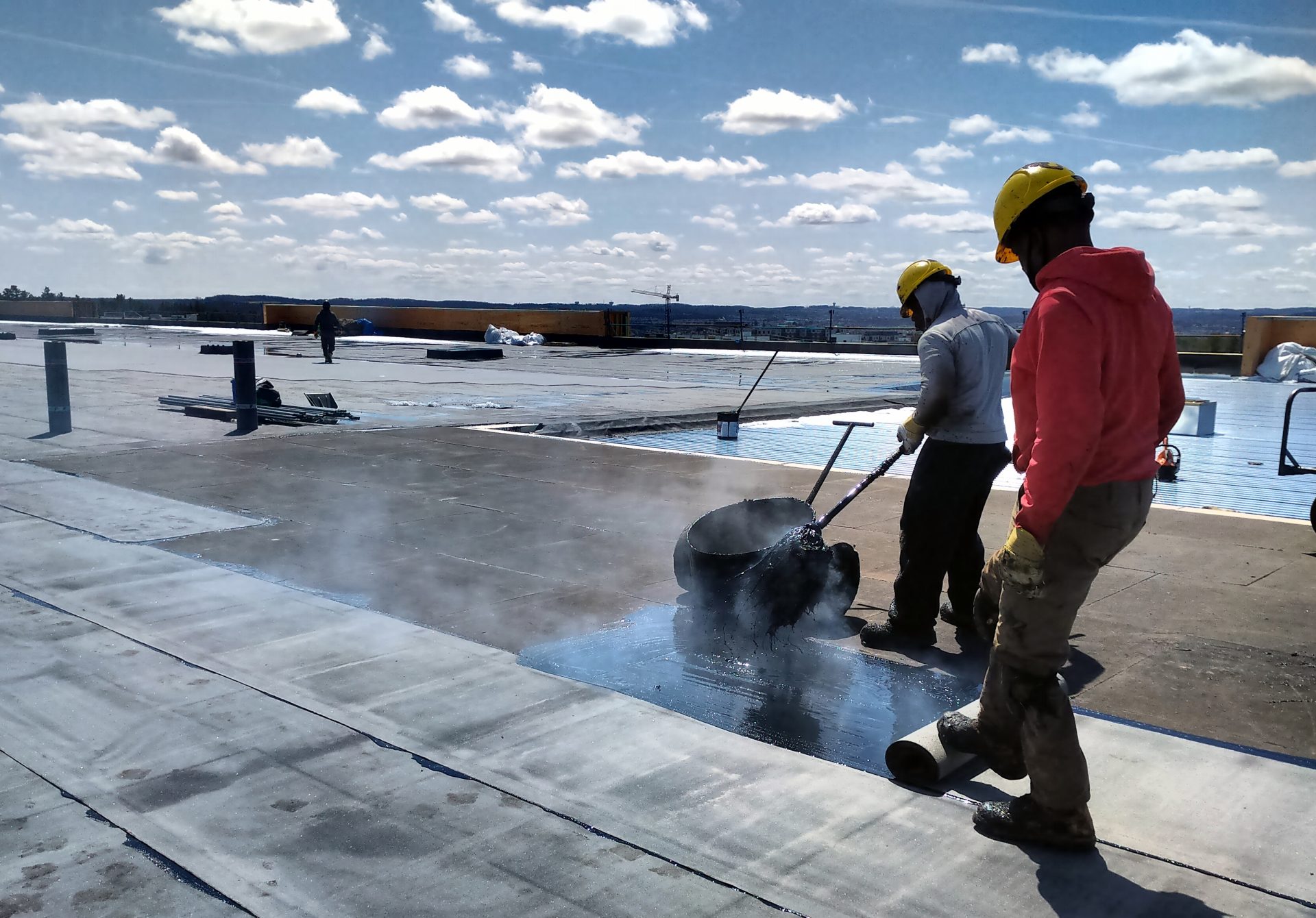 It’s worth noting that BUR is still the most common roofing material used on low-slope roofs. Its popularity is not surprising given its many valuable qualities, including:

As with any roofing method, you’ll receive the most benefit from your BUR roof when you hire a company that delivers superior materials, design, and workmanship. We recommend finding a roofing company known for its high-quality, one you can trust to provide you with the highest value and service throughout your roof’s service life. The experts at Elite Roofing in Vaughan, just north of Toronto, are happy to work with you on your commercial or residential flat or low-slope roof, with built-up roofing that will stand the test of time.