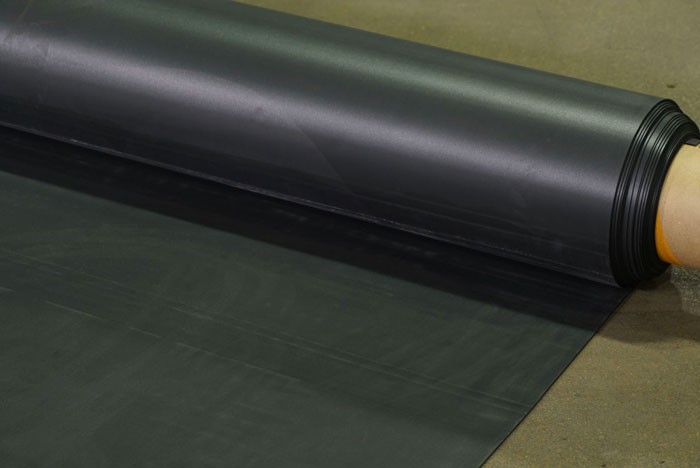 Ethylene-Propylene-Diene-Monomer (EPDM) in the roofing world has been a standard practice since its invention by DuPont in the 1950s. EPDM, a form of synthetic rubber, is a widely used roofing material due to its highly durable, heat-resistant, UV and weather-resistant, and extremely flexible properties. Technological enhancements to the seams, angle change securement, puncture resistance properties, and flashing details have dramatically improved performance and that EPDM roofs offer, and is the roofing material of choice for numerous architects, contractors, and building owners. This week, we’re breaking down everything you need to know about EPDM.

What You Need To Know:

History and Evolution of EPDM as a Roofing Material

EPDM was developed by DuPont in the 1950s and first used as a roofing membrane in the early 1960s. It was invented because the natural substance of rubber could not meet the world’s high demand.
The material became popular in the 1970s as the Middle East oil embargo drove up the price of asphalt-based roofs and lowered the quality of available asphalt. By the 1980s, EPDM dominated the single-ply roofing market.

Carlisle Syntec Systems was the first roofing company to use the DuPont technology to manufacture EPDM rubber roofing for the roofing market. Subsequently, they were joined by Firestone Building Products and Jonhs Manville, who made their own version of Ethylene-Propylene-Diene-Monomer roofing. Although there are many brands of EPDM roofing, these 3 companies are the only manufacturers of EPDM roofing in the U.S. today. All three companies offer quality products that are able to withstand the harsh conditions often found on roofs. The only noticeable difference between the three different membranes is that Carlisle’s product has more visible dust on its surface, which requires more cleaning.

Currently, EPDM is used in about 20% of all low-slope (“flat”) roof installations in North America each year, including both new construction and roof replacements. Because of its high durability, roofs made using EPDM tend to last a long time. Since its introduction, numerous enhancements have been made to the system components, making today’s Ethylene-Propylene-Diene-Monomer systems far more robust and of greater value than ever before. There are 4 major enhancement areas that have been made to EPDM system technology, improving performance and increasing value for building owners.

In the mid-1980s, a butyl-based splice adhesive was developed for EPDM seams as it was known to be tolerant of water. However, the seaming process still involved multiple steps, leaving seams prone to variations caused by workmanship techniques and installation conditions.

It wasn’t for another 20 years that customized primers and double-sided seam tape emerged. These products dramatically simplified the seaming process and reduced workmanship inconsistencies. Around 2005, seaming elevated to the next level with EPDM sheets and Factory-Applied tape. This further decreased workmanship issues and improved the quality of finished splices, providing more consistent results.

Instead of using wood, nailing strips were used to hold the EPDM membrane in place at a 90-degree angle at the base of parapet walls, extruded rubber and plastic nailing strips were found to be a much better solution. This change resolved the issue of having nailing strips that dried out over time, causing the membrane to “bridge” away from the wall.

According to Flat Roof Solutions, In 1989 Carlisle Syntec Systems introduced the RUSS (Reinforcing Universal Securement Strip) detail, in which a 6” wide reinforced EPDM membrane is held in place by fasteners and 2” metal seam fastening plates. EPDM field membrane is then spliced onto the RUSS with the same shear-resistant products used for seaming. The RUSS has performed well for about three decades now, and is still being used today.

Today, contractors even have the option of a 90-mil Ethylene-Propylene-Diene-Monomer , which has twice the puncture resistance of the original 45-mil rubber and contains the most weathering material of any single-ply membrane on the market.

Flashing detail improvements have significantly enhanced the overall quality and performance of Ethylene-Propylene-Diene-Monomer roofs. According to SBC Magazine, from 1962 to the 1980s, wall and penetration flashings were manufactured from uncured neoprene which was prone to cracking. In the mid-1980s, flashing made of uncured EPDM was introduced. This offered dramatically improved weathering properties and resolved the surface cracking issues. Today’s pressure-sensitive flashings feature a full 60-mil EPDM weathering layer laminated to 30-mil cured adhesive for a 90-mil total thickness. This added thickness contributes to the durability and robustness of Ethylene-Propylene-Diene-Monomer flashings.

Figuring out the right materials for your roof can be a challenging task. If you’re looking for more information on how you can maintain the health of your roof, click here to contact us. Our team of experts is available 24/7 to address all of your roofing needs.